Originally published at 狗和留美者不得入内. You can comment here or there.

I am writing this as a way to go through in detail the section on elliptic functions in Schlag’s book.

is an even elliptic function of degree two with

as its group of periods. The poles of

are precisely the points in

and they are all of order

Proof.  It suffices to prove that

converges absolutely and uniformly on every compact set

. Periodicity allows us to restrict to the closure of any fundamental region. There exists

such that for all

is sufficiently large. In

, which means the above converges when

, and this, with the above bound, means

. Moreover, the degree of (4.16) is determined by nothing that inside a fundamental region the series has a unique pole of order

For the second part, we note that when

which means the series defining

, which is clearly even, converges absolutely and uniformly on compact subsets of

. For the periodicity of

is periodic relative the same lattice

, which has to be zero by

Another way to go about it to define

, from which by periodicity, we have

From this we can solve that

s are constants for

as before, one has

are pairwise distinct. Furthermore, one has

View the torus as

is odd and has a pole of order

but no other poles in

Oddness with periodicity applied at

are the three zeros of

, each simple, and thus also the unique points where

are distinct, because if not

would assume such a value four times, impossible when the degree is

with the zeros cancelled out, and thus equal to a constant.

, the highest pole of

is one of order

, we have essentially a cubic in

has pole of order

. In taking the limit towards zero, we only need to consider the

term, which has the highest order pole, which is also of order

. That means our constant function is

The final statement follows by observing from the Laurent series around zero, which is, from the geometric series of

is even, the odd coefficients must vanish. So we have 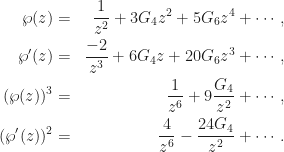 What we want is to find the

becomes analytic and thus constant, and to do that we must vanish out all the poles at

coefficients tells us to multiply

. After that, we have from the

is a rational function of

is even, then it is a rational function of

is non-constant and even. Then for all but finitely many values of

and denote them by

. Moreover, we can ensure that the zeros of

are distinct from the branch points of

is even and with

have the same zeros and poles which are all simple. It follows that

. Solving this relation for

is rational. Finally, if

is any elliptic function, then

is a decomposition into even/odd elliptic functions whence

We conclude with the following question: given disjoint finite sets of distinct points

as well as positive integers

, respectively, is there an elliptic function with precisely these zeros and poles and of the given orders? In the case of

since the degree must be constant throughout.

For the tori, we first observe that by the residue theorem one has

is the boundary of a fundamental region

such that no zero or pole lies on the boundary. Second, comparing parallel sides of the fundamental region and using the periodicity shows that the left-hand side is (4.25) is of the form

. (This follows from that

is the difference of logarithms of the same value, which regardless of branch must be an integer multiple of

Now consider the edges in

The branch of logarithm here is irrelevant, since the arbitrary constant is differentiated away. By periodicity applied to the difference in this integral,

The other edge pair gives an element of

Theorem 4.17.  Suppose (4.23) and (4.24) hold. Then there exists an elliptic function which has precisely these zeros and poles with the given orders. This function is unique up to a nonzero complex multiplicative constant.

expanded out with their respective multiplicities, we obtain sequences

of the same length, say

s by lattice elements if needed, one has

Finally, we observe how we can solve (4.22) by integrating

where we choose some branch of the root, which yields

In other words, the Weierstrass function

is the inverse of an elliptic integral. The integration path in (4.30) needs to be chosen to avoid the zeros and poles of

, and the branch of the root is determined by

with similar restriction on the path and the choice of branch. This case though is a periodic function with one period, whereas in (4.30), there are two periods.