Directly managing was not Mao, but Deng Xiaoping and Liu Shaoqi, who were both promoted to high up positions such as Politburo Standing Committee and Vice Chairman around the time of 1956. 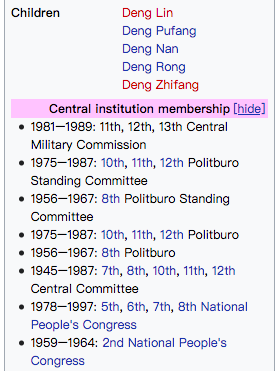 And interestingly, whoever editted that page of English Wikipedia made a serious mistake of omitting the fact that Deng was removed from all posts in April 1976 and later reinstated in July 1977.

The party secretaries of provinces of Henan and Anhui, where the famine was the worst, Wu Zhipu (吴芝圃) and Zeng Xisheng (曾希圣), were politically attacked during the Cultural Revolution but "rehabilitated" by Deng Xiaoping in the late 70s. The latter was also the guy who introduced Deng Xiaoping to his wife. More details can be found at https://gmachine1729.livejournal.com/172350.html.

Similar for the party secretaries of Sichuan and Shandong. See below for evidence.

Mao brought back Deng in 1973 after the Lin Biao Incident in 1971. Here is a photo, likely taken around that time.

It is said that he was behind the mass protests on Tiananmen Square that culminated in an incident on April 5th, 1976, after which he was again ousted, with those protests denounced as "counterrevolutionary". However, after the Gang of Four was arrested in late 1976, Deng and his allies won a power struggle against designated successor Hua Guofeng and his allies, including Wang Dongxing. In the course of that power struggle, Deng was able to rehabilitate the 1976 Tiananmen incident as well as many high up cadres denounced during the Cultural Revolution.  Such names include:

Obviously, he rehabilitated these top "criminals" or "bunglers" out of his deep association with them, as a way of gaining political support. Though he was removed from his post, he still kept his party membership, and in practice, he has some influence over the military, maybe more so than did Ye Jianying.

The high up people he arrested, imprisoned, posthumously denounced, or stripped of party membership include:

It is worth noting that in Beijing during the height of the Cultural Revolution in 1966-1967, the kids of many high up cadres like Deng Xiaoping and Liu Shaoqi had their own Red Guard units (联动 liandong, or "coordinated action") with the goal of protecting their parents to ensure that they would inherit political power. They used a "theory of bloodlines", which is obviously feudal in essence, among other tactics to justify themselves, doing what they could to divert the attacks towards other groups, including important scientists and engineers or former capitalists and landlords. But eventually people saw through their "conspiracy", and their Red Guard organization was denounced as counterrevolutionary, with police chief 谢富治 (Xie Fuzhi) playing a major role in that.

That Deng Xiaoping rehabilitated the party secretaries during the Great Leap Forward of the most famine-stricken provinces pretty much unambiguously implies his culpability for it, or at the very least, an implicit approval of it. Blaming Mao for it, which Deng and his cronies did afterwards, is bullshit because that one person on top doesn't actually directly manage anything, he only selects top managers and receives reports and provides feedback from them. If a top manager screws up, it's mostly that top manager's problem, though of course, the number one guy also bears responsibility for using or promoting an incompetent.

This makes it patently obvious that Deng Xiaoping is not only incompetent but also extremely unethical. No wonder why America liked him so much, even making him person of the year on Time Magazine once or twice.

From the above photo, one is reminded of how Deng was 4'11" (150 cm), or something around that. And one can't help but notice how much larger Mao's head is than Deng's. There is certainly at least 1 standard deviation difference in IQ, if not 2 or 3.

And I hate to say it but people who are dumb and incompetent tend to also be more unethical. Because in general, actually smart and competent people don't need to engage in unethical, opportunist, or conspiracist behavior anywhere near as much to get ahead.

I heard from older people that many who initially promoted Deng after Mao's death, including Ye Jianying and Wang Zhen, both deeply regretted it. And had he not been purged in 1966-1967 and again in 1976, he would have gotten more power and been even worse.

My friend who has observed the general lack of ethics in Chinese with American degrees (voluntarily obtained, unlike me) once pointed out to me that Mao's designated successor Hua Guofeng looked a lot like Mao himself. I'll let the reader judge for himself on that one.

Certainly, Hua Guofeng (who is northern Chinese) looks big and tall and macho, the antithesis of Deng Xiaoping, and in that regard much more fit to be a leader. Unfortunately, Deng Xiaoping had much more in terms of political connections and background and almost certainly used some very shady means to usurp power. Some blame Hua Guofeng for being too politically weak amidst Deng's machinations, as well as his actively helping remove the Gang of Four, which later contributed to his demise as well.

Posts from This Journal “大跃进” Tag