Originally published at Inside the Mind of the G Machine. You can comment here or there.

Long time ago when I was a clueless kid about the finish 10th grade of high school, I first learned about Euler’s determination of

. The technique he used was of course factorization of

via its infinitely many roots to

Equating the coefficient of

, with the coefficient of

in the well-known Maclaurin series of

This felt to me, who knew almost no math, so spectacular at that time. It was also one of great historical significance. The problem was first posed by Pietro Mengoli in 1644, and had baffled the most genius of mathematicians of that day until 1734, when Euler finally stunned the mathematical community with his simple yet ingenious solution. This was done when Euler was in St. Petersburg. On that, I shall note that from this, we can easily see how Russia had a rich mathematical and scientific tradition that began quite early on, which must have deeply influenced the preeminence in science of Tsarist Russia and later the Soviet Union despite their being in practical terms quite backward compared to the advanced countries of Western Europe, like UK and France, which of course was instrumental towards the rapid catching up in industry and technology of the Soviet Union later on.

I had learned of this result more or less concurrently with learning on my own (independent of the silly American public school system) what constituted a rigorous proof. I remember back then I was still not accustomed to the cold, precise, and austere rigor expected in mathematics and had much difficulty restraining myself in that regard, often content with intuitive solutions. From this, one can guess that I was not quite aware of how Euler’s solution was in fact not a rigorous one by modern standards, despite its having been noted from the book from which I read this. However, now I am aware that what Euler constructed was in fact a Weierstrass product, and in this article, I will explain how one can construct those in a way that guarantees uniform convergence on compact sets.

Given a finite number of points on the complex plane, one can easily construct an analytic function with zeros or poles there for any combination of (finite) multiplicities. For a countably infinite number of points, one can as well the same way but how can one know that it, being of a series nature, doesn’t blow up? There is quite some technical machinery to ensure this.

We begin with the restricted case of simple poles and arbitrary residues. This is a special case of what is now known as Mittag-Leffler’s theorem.

be a sequence of distinct complex numbers satisfying

be any sequence of non-zero complex numbers. Then there exists a (not unique) sequence

of non-negative integers, depending only on the sequences

, such that the series

is meromorphic, with simple poles

Proof: Total convergence, in case forgotten, refers to the Weierstrass M-test. That said, it suffices to establish

. For total convergence on any compact set, we again use the classic technique of monotonically increasing disks to

centered at the origin with radii

we can for any

to satisfy this. This makes clear that the

is our mechanism for constraining the magnitude of the values attained, which we can do to an arbitrary degree.

The rest of the proof is more or less trivial. For any

the disk of which contains it. For

, we can bound with

, which must be bounded by continuity on compact set (now you can see why we must omit the poles from our domain).     ▢

be regular in a compact set

, and let the series

be totally convergent in

. Then the infinite product

is uniformly convergent in

Now we present a lemma that allows us to take the result of Mittag-Leffler (Theorem 1.1) to meromorphic functions with zeros and poles at arbitrary points, each with its prescribed multiplicity.

be a meromorphic function. Let

be the poles of

, all simple with respective residues

is meromorphic. The zeros (resp. poles) of

), and the multiplicity of

Proof: Taking the exponential of that integral has the function of turning it into a one-valued function. Take two paths

with intersects not any of the poles. By the residue theorem,

is the sum of residues of

must be an integer from which follows that our exponential is a one-valued function. It is also, with the exponential being analytic, also analytic. Moreover, out of boundedness, it is non-zero on

. We can remove the pole at

remains analytic and is without zeros at

. From this, we derive

We can continue this process for the remainder of the

be meromorphic, and regular and

be the zeros and poles of

is a zero and

is a pole of

. Then there exist integers

and an entire function

where the product converges uniformly in any compact set

s such that the series is totally convergent, and let

is meromorphic, with zeros

have the same zeros and poles with the same multiplicities, whence

is an entire function, and

Uniform convergence along path of integration from

(not containing the poles) enables term-by-term integration. Thus, from (1.2), we have 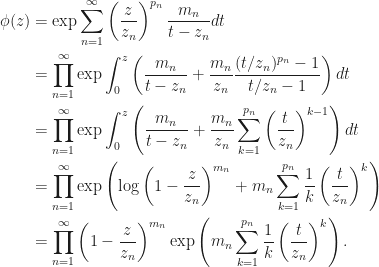 , we can always bound the length of the path of integration, whence, by Theorem 1.1, the series

is totally convergent in

. Finally, invoke Lemma 1.1 to conclude that the exponential of that is total convergent in

, our function has a zero or pole, we can easily multiply by

the multiplicity there to regularize it. This yields

for Weierstrass factorization formula in this case.

Overall, we see that we transform Mittag-Leffler (Theorem 1.1) into Weierstrass factorization (Theorem 1.2) through integration and exponentiation. In complex, comes up quite often integration of an inverse or

order term to derive a logarithm, which once exponentiated gives us a linear polynomial to the power of the residue, useful for generating zeros and poles. Once this is observed, that one can go from the former to the latter with some technical manipulations is strongly hinted at, and one can observe without much difficulty that the statements of Lemma 1.1 and Lemma 1.2 are needed for this.